Off Grid Living – In Luxury

So, we are now entirely off grid in terms of energy supply. Whilst we are connected to mains water, our electricity is reliant on solar panels (we have a commercial grade generator for backup obviously!) and our gas supply is butane bottles.

The system is a 48v 17.2kWH and should provide 2kWH of solar energy per sunlight hour. For 2 adults, working from home, we figured that was a workable amount of electricity.

Of course, prior to switching to off grid, we did receive a couple of warnings.

All in all, these were restrictions we thought we could live with.

And that’s when we discovered that not all solar setups are created equal. I wasn’t very knowledgeable about solar energy until a few weeks ago but have rapidly had to increase my knowledge in order to get the system to give us the amount of energy of which it is capable.

Firstly, the solar panels themselves. We have 10 x 200 watt 24 volt panels at the moment, all well positioned (facing south) and get the most sun hours possible.

This gives us in an ideal scenario 2kW/hr charge into the battery bank. We’re only using 8.6kWH maximum so that’s 4.3 sun hours required to fully charge the batteries. Obviously, you need to minus the running load during the day as the solar array will power the devices running as well as charging the batteries (providing you don’t use more power than the array is generating of course! This is where the no hair dryer & irons bit comes in). On average we’re getting over 6 good sun hours a day all year round, summer obviously peaks and winter troughs.

We have a Victron Energy MultiPlus Inverter / Charger the biggest and best model they do which is rated at 5000VA. Up to 6 units can be run in parallel so if in future we need more power we can simply add another 1 or even 2 units in if needed. The system is one of the best on the market and switches power sources in less than 20 milliseconds. It has 2 AC power outputs so that you can put essential equipment on the primary and non-essential on the secondary. It has three phase capability and handles generator input seamlessly. 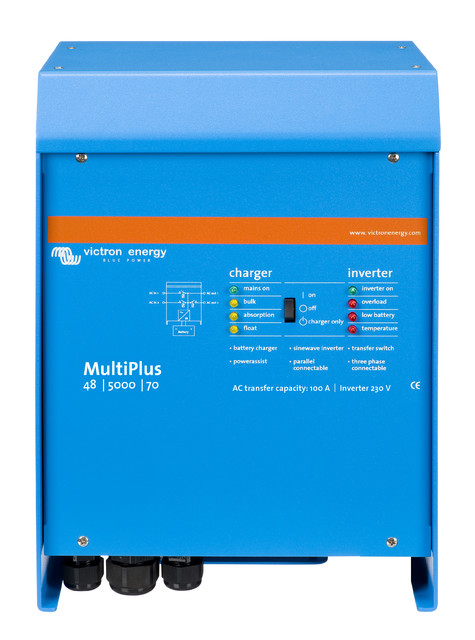 The batteries are large 2 volt lead acid 360 amp hour units, yes that’s right I said 2 volts! There are 24 of them wired in series to make one huge 48 volt battery. 360 Amp hours at 48 volts equates to 17.2kWH of energy storage. Given that you’re not supposed to discharge the batteries (lead acid – deep discharge, see below) below 50 percent of their capacity that gives us 8.6kWH which is available for non sun hours (nighttime) the system supplies the appliances during the day and charges the batteries you see.

Ok…so this is a big deal for a number of reasons. I’ll keep it as short as possible as there is a huge scope to go into too much detail here.

Basically when it comes to electricity the lower the voltage the higher the amperage which means increased resistance. This means that you need hugely thick wires (that have less resistance) to transmit a very low voltage with high current over any distance, the longer the distance the thicker the wire you’re going to need to avoid any energy loss. This is where increasing the voltage comes into play. You’ll probably be aware that most household appliances run at 230-240 volts, this is so the wires don’t have to be really thick in order for these devices to work! The same applies to the wiring in your house. Higher voltage means less resistance and less loss over distance, this is why overhead power lines run at hugely high voltages and can run on very thin wires, compare those wires to say the ones on your car battery! You get the idea.

So in a nutshell… 48 volts from the panels (wiring them in series to create that voltage) means that you lose less energy along the way and can use much thinner cables which cost much less.

We are actually having our panels re-wired so that we have 120 volts coming in from the solar array, this of course meant that we had to buy a new solar charger controller that can handle that kind of voltage and charge the batteries (48v) accordingly, but will result in more power coming into the batteries.

The system is fully expandable and if need be extra battery capacity can be added as can another inverter unit which will allow higher loads to be run using the battery power alone.

For the power hungry home or those who want to be able to have a good few days of total backup in any scenario this is a very good option.

For low power consumption (fridge freezer, LED lights, TV etc). This cheaper solution will give you the power you need.

Off Grid Living – In Luxury